Things to do in Dubrovnik

The small Croatian coastal city of Dubrovnik fits in a lot to do in a little space. A lovely city that is filled with historical things to do, perhaps none better than walking the fortified inner city’s walls, as well as great beaches and even a nearby island to explore. Minus the hustle and bustle of larger European cities Dubrovnik brings ample opportunity for its visitors to take some time to relax and just enjoy themselves. A few of the best things to do while in Dubrovnik include. 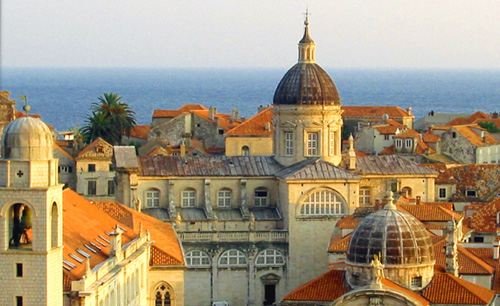 City Walls
Built and rebuilt 3 times between the 13th and 15th centuries the Dubrovnik city wall were constructed to protect this beautiful city from foreign invasion. At some points the walls are 20 feet thick. There are also outpost towers and forts around the whole periphery. In modern times the threat of foreign invasions is waning so the walls now just act as a great vantage point to look down upon the old town of Dubrovnik and out into the Mediterranean Sea. During the summer certain festivals, like the Shakespeare Festival, even take place in some of the wall’s towers. Be sure that you have a hat and some water while you walk the walls circumference as the Croatian sun can and will take its toll. The wall is open to walk from 9 am to 5 pm (7pm in the summer) and costs around $9 US dollars.

Dubrovnik Cable Car
Twenty years after its bombing back in 1991 the cable car has been re-opened in Dubrovnik during that year’s Summer Festival – the biggest yearly event in Dubrovnik. There is universal agreement that the best views over Dubrovnik are from Srd Hill, which the cable car delivers people to after a scenic ride in the car itself. Some travelers suggest saving some money, and adding to the experience, by just purchasing a one way ticket on the cable car then enjoying a lovely downhill walk back to Old Town Dubrovnik soaking in the wonderful views over the Southern Dalmation coast. Re-fuel before the walk back at the hills elaborate snack bar. Cable car rides are available from 9 a.m. to 9 p.m. Tickets for a round trip cost around $14 US dollars.

Dubrovnik Cathedral
Kneza Damjana Jude 1 | 20000, Dubrovnik
Often called the Church of the Assumption Dubrovnik Cathedral is actually the third church that has been built on this site. Previously there had been a Byzantine style building in the 7th century before it was replaced by a Romanesque Church in the 12th century. When an earth quake destroyed that church in 1667 the present structure, in its Baroque style, was erected. The most noteworthy element of the church is its collection of art which features Titian’s The Assumption at the main altar. Visitors are welcomes to the church from 9 am until 5:30 pm, with the exception of Sunday morning during mass. For a small fee, of around $2 dollars US, visitors can explore the cathedral’s treasury as well.