The Beauty Of Cornwall 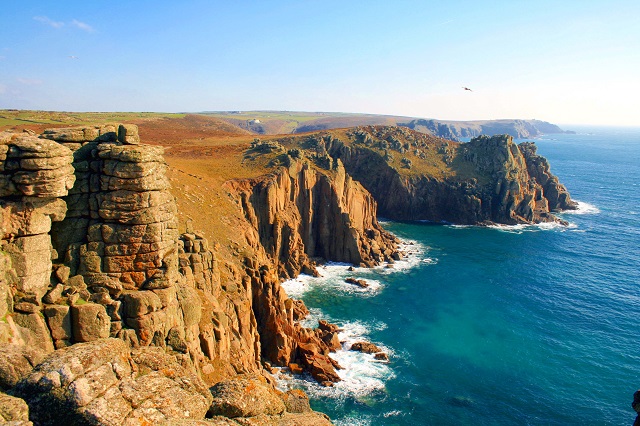 Cornwall sits at the far south-west of the UK. It is a land of rocky coastlines, 300+ beautiful beaches, artists, and myths and legends. And “Poldark”.

The first thing to say about Cornwall is that it is extremely popular with British people as well as foreign visitors, and gets incredibly busy in the summer. If you have to drive around the area during the school holidays and you want to enjoy the scenery, then you really need to get out before breakfast. Most of the roads are narrow and get clogged with traffic pretty quickly, so you want to do your driving at off-peak times if at all possible.

Cornwall is a beautiful place. Both the north and south coasts have many popular beaches and picturesque fishing villages, like Boscastle, Port Isaac, and Mevagissey. And there’s also Mousehole, once described by the writer Dylan Thomas as “quite the loveliest village in England”.

The combination of landscape, the sea, and the light has drawn writers and artists to Cornwall over many years. St Ives has a well-established School Of Painting, as well as the fairly recent arrival of a branch of the renowned Tate Gallery. Not far away, the village of Newlyn, became important in the British Impressionist movement during the 1880s.

If you prefer more theatrical culture, then the spectacular Minack Theatre, just a few miles from Land’s End, is well worth a visit. You can pay a small fee just to look around this amazing open-air venue, or see one of the shows that run during the season from May to September. If the weather holds up, it can be quite an experience watching a quality production while perched on the edge of a sea cliff.

Speaking of Land’s End – it is a tourist hotspot, and does get very busy during the summer, but there are plenty of things to do. Many people go there to get a photo of themselves next to the signpost which was erected in the 1950s. It’s also a great area for hikers and birdwatchers, and there are shops for those who prefer a bit of retail therapy. The Land’s End Landmark even includes a cinema, and an interactive exhibition showing more about the history of the area. There is also a small airfield, from where you can fly to the Scilly Isles, which would make a great day trip.

We can’t mention Cornwall without talking more about the sea, and the surfing. Despite the cold water, people surf here all year round, and many of Cornwall’s beaches provide good surfing conditions. The best beaches are on the north coast, which provides more consistent surf – and the most popular of these is Fistral, in Newquay.

If you’re travelling to Cornwall just for the surfing, it is possible to get flight connections from London to Newquay’s small airport, and there are a few connections to nearby European destinations too. Otherwise, the closest international airports are Bristol and Cardiff, from where you can get public transport or hire a car to Newquay or any of the many lovely spots in Cornwall. Cornwall has many accommodation options from B&B to high end resorts like Trenython Manor – all of which offer exceptional deals if you do your research.